Personally, I am not happy about Summer in the South...it's the pits!  It will be so hot and humid from now until November at least....ugh!  You won't see me celebrating...lol!  I have been staying busy which is the best thing for me when I am grieving or dealing with a problem....it seems I work harder which is good as there are "miles to go before I sleep".
I've been doing a little of this and a little of that..........some cleaning but not nearly enough........and pulling out a few summer decorations. 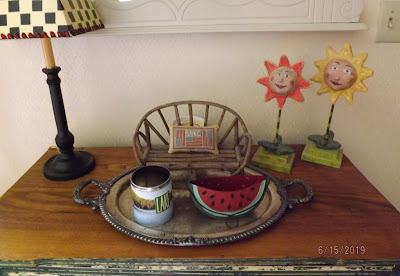 some gardening...........remember those "snow peas"...lol!
They weren't, they were real peas I just didn't let them mature long enough.....patience is a virtue Sam!  One I need to practice evidently!  I was so thrilled.  I have never grown peas before as no one ever liked them.  That's because we grew up with those horrible canned peas...army green and mushy....yuck!  But look at these babies!  I have about 2 cups which I will cook up tonight and savor! 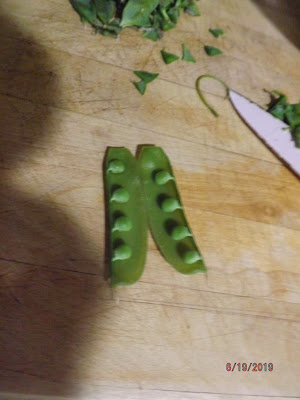 The grands are not coming down this summer and they have outgrown these pools plus this one has several holes.  I was going to throw them out but then a light bulb went off in my head.....a raised bed!  So I am painting it.  It needs more and then the inside....the littler one will get the same treatment.  See the orange paint on the grass?  The fiber optic people are in the neighborhood and instead of leaving breadcrumbs to the electric box from the pole.....they spray painted orange paint.  They had done it in between my trips out to paint the pool.  I never heard them and imagine my surprise when I came out and saw orange paint when I was using a cream color!  It took me a few minutes to figure it out.  Maybe it was National Spray Painting Day yesterday?  I have 4 bags of dirt but I don't think that is going to do it.  There may be a trip to Walmart for more paint and more dirt. 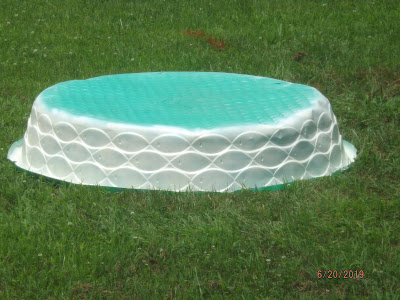 After shelling the peas I moved ahead to toasting the spaghetti squash seeds I had saved.  I found a new recipe I wanted to try at www.eatingwell.com
I only had about 1/4 cup but it was still worth it.  They were delicious!  I wonder if I could freeze the seeds until I have more?  I never have very many at a time.  I only had 1 squashes worth so I cut the recipe in half but they were so good! 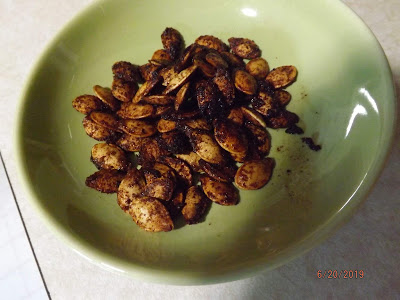 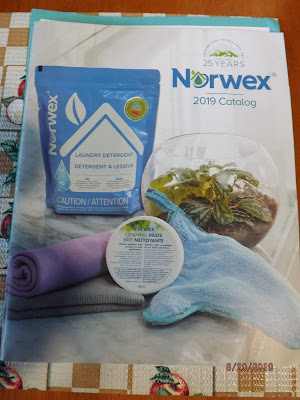 She also sent me one of the their Enviro micro fiber cloths.  I've used microfiber before and I didn't care for it but I tried this little cloth to clean my microwave and whoa Nellie.....it was amazing and I had the microwave cleaned in no time!  Ben told me to pick out what I wanted and he would get it for me......he has their mop system and raved about it.  It's very pricey though.  I might get a few of their silicone lids as that is something I've wanted in order to stop using plastic wrap.  These cloths contain silver which kills germs right on the cloth from what I understand....no wonder they're expensive!  If you can afford it I recommend  their microfiber...I was amazed. 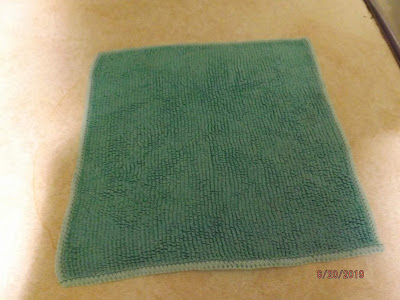 I've been trying to get back to my cross stitch "days" and I did work on Witchy Wednesday and today is Fall Friday.  Yesterday I decided to work on my Quaker Flag which will actually be for Stars and Stripes Saturday............one 'stripe' of the flag is done.....I love this design and it is very relaxing to work on. 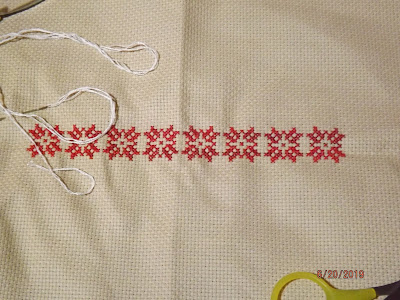 Today is more painting and maybe a trip to Walmart.  Bread is baking in the oven and then I need to shell the rest of the peas.  I want to make mango and corn salsa and a blueberry sorbet.  I went to the doctor in Mountain Home for a "wellness" checkup (ie; the insurance companies aren't making enough money so if you want your prescriptions filled you have to go....racketeers!) and the doc said I was in "tremendous" good health.....happy about that but I was not happy with what the scale said.  I do not believe in diets but I do believe in eating healthy and I was never overweight in my life until they messed with my thyroid.  I went on All Recipes and looked into their low fat recipes that were highly rated so we shall see.  Lots of things change as you age so I am trying to change with it.
I hope you enjoy your first day of summer!
Happy Trails!!!