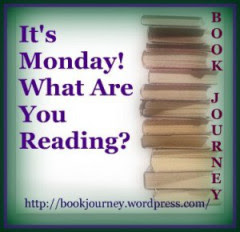 I'm not reading too much lately but I have gone to an audio book so I can work and read at the same time! LOL!
I finally finished this wretched, wretched book!  This was the worst book I've read since I accidently got a hold of that self-published book.  So, I will never read a book that's a Pulitzer winner ever again, I will never read a book written by a professor of English or anyone who teaches writing.  Hopefully that way I will avoid wasting my precious reading time!  It was like a dying man's stream of consciousness who wasn't all there or else a REALLY long sermon.  I kept thinking it would get better but it never did.  There were a few sentences that were quotable but that was about it.  I still have no idea what she was trying to convey other than truly simplistic values.  I hate to say it but I couldn't wait to be done with it!
But just in case anyone is curious...."it is a story about fathers and sons and the spiritual battles that still rage in America's heart.  In the luminous and unforgettable voice of Congregationalist minister John Ames, Gilead reveals the human condition and manages to convey the miracle of existence itself".  This book was a National Bestseller and won all kinds of awards.  What's wrong with me?  The miracle of existence?  Really? I must have missed that part. LOL! 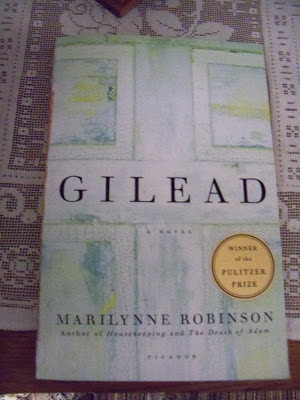 I just started Little, Big last evening and after Gilead it has to be better!  So far it's intriguing as it seems to be part fantasy and part reality....."Little, Big is the epic story of Smoky Barnable, an anonymous young man who travels by foot from the City to a place called Edgewood - not found on any map -to marry Daily Alice Drinkwater, as was prophesied.  It is the story of 4 generations of a singular family, living in a house that is many houses on the magical border of an otherworld.  It is the story of fantastic love and heartrending loss;  of impossible things and unshakable destinies; and of the great Tale that envelopes us all.  It is a wonder." 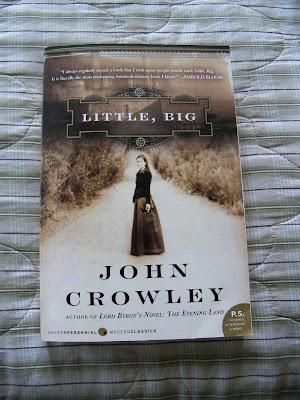 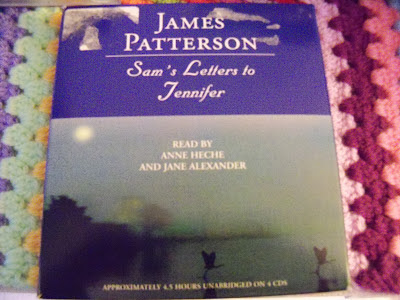 I'm on the second cd of 4 of Sam's Letters to Jennifer and it is really good and also strangely similar to part of my life.   My nickname is Sam and I am Grandma Sam like Jennifer's grandmother.  It takes place in Lake Geneva, Wisconsin,  where I spent quite a few summers in my young adulthood and took my children there when they were young.  There were a few other similarities that I won't go into but it was almost creepy similar like the author knew me but of course that can't be true .....or can it?
Sam's Letters to Jennifer is the story of a woman summoned back to the town where she grew up.  And in the house where she spent her most magical years she finds a series of letters addressed to her.  Each of those letters is a piece of a story that will completely upend the world she thought she knew----and throw her into a love more powerful than she ever imagined could be possible.  Two extraordinary love stories are entwined here,full of hope and pain and emotions that never die down."
So far, I have already had to reach for the kleenix and it definitely has a great storyline and keeps you wanting more but then I have to shut it off and go get SOMETHING done!  Dang it!  I highly recommend this audio book and I'm not even half way through it! LOL! 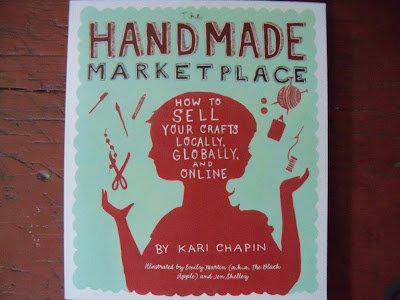 I'm still reading this but I don't pick it up every night....it depends how late it is and how tired I am.  But it is just "chock full" of information and I know it will never leave me as it is such a great reference book.  Again, even though I am not done reading it, I highly recommend it!
I love Mollie Makes magazine.  Unfortunately this is the only one I have.  It came with those vintage buttons too!  But it is from the U.K. and expensive to ship over.  But if I ever spot one and have the greenbacks I indulge myself.  It is a publication devoted to "making, thrifting, collecting and crafting".  It is a feast for my senses with that U.K.,  across the pond creativity and color sense that I can't seem to get enough of.  I think I could go to there and live in the country or a small village and live happily ever after.  But since I'm not there, Mollie Makes brings me closer!  Plus, it has all sorts of web addresses in there of interesting shops and places and people.  I'm all for importing everything from there!  Along with Green Gate items. LOL! 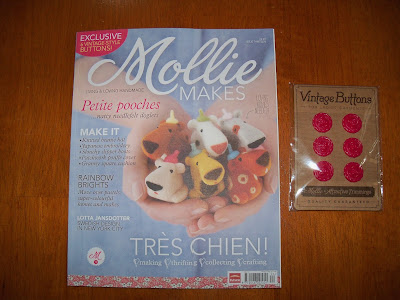 Well....that's all now.  I will also add movies if I ever watch any but that is rare.  I'm always doing handwork and don't want to get too involved in the "silver screen" if it's good because that's when I mess up! LOL!  Mindless, boring t.v. is good for me....I make less mistakes.  Toodles!  Thanks for stopping and commenting....I always appreciate it!

I'm still "refining my projects for this coming year but I have a new page up for this Year of Projects on the left side of my blog and last year is there too.  For now though I'm trying to finish up a couple of WIP's from last year.  I started sewing the I-cord into a spiral for my chair pad last night.  I am using DMC #8 perle cotton.  This is the same thread I use for my wool applique and it is easy to work with and strong.  You use a whip stitch to stitch it together.   I didn't get too far as Summer leaves me exhausted by the end of the day! LOL!  Like I've said before......it's double the work load in the summertime around here and trying to get the house "real estate ready" and keep it that way is going to be a whole other challenge. 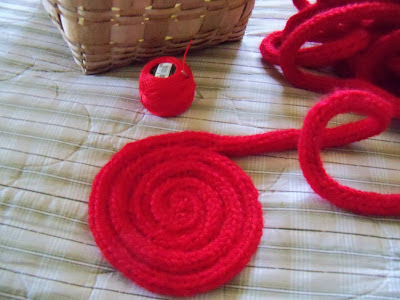 I finally got the pillowcase done with the blanket stitch which is the foundation for the crocheted edging that I hope to get to this evening.  It took me about 3 tries before I got the gist of it and this is a stitch I am very familiar with!  Heaven help me! LOL! 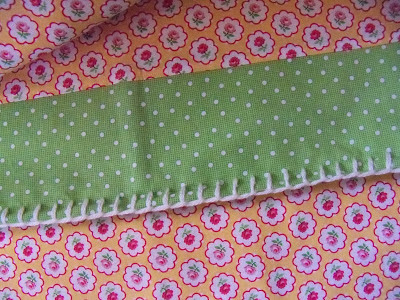 This is my first knitting instruction book that I bought a few years ago.  It sat there for awhile before I started using it but it's a great book for a beginner and I still refer to it.  I was thinking of doing all the patterns in it but not this year.  I really would like to join or start a group to knit or crochet through a book some day.  I think that would be fun to knit the same things with a group of friends at the same time. 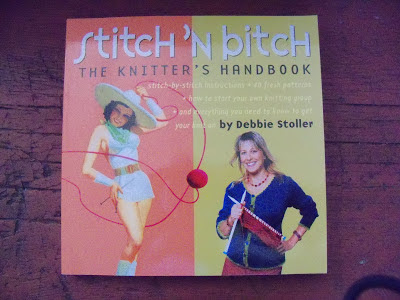 I also promised you a "quick and easy" recipe so you could have more stitching time.  I have a sweet tooth....not a bad one but a sweet tooth none the less.  I always have to have a little something in the evening with a cup of tea.  Usually it's a cookie of some sort but when I'm short of time I make a Dump Cake.  Some of you are probably already familiar with this quick dessert but just in case you're not here's my favorite version of it.
Also, since I live alone, I make mine in an 8 X 8 inch pan but you could double for a 9 X 13.

Put 1 can of unsweetened cherries with the juice into the pan.  Add 1/2 of a box of yellow cake mix, lay 16 pats of butter (using an entire stick of butter) on top (4 X 4 works for me) and sprinkle on 1/2 cup of chopped pecans.  Bake in a 350 degree, pre-heated oven for 35-40 minutes or until golden brown.  Serve with a big scoop of vanilla ice cream!
This recipe takes like 5 minutes to put together and you are back to stitching!  I refrigerate but you can always heat up a piece in the microwave as it is so good warm out of the oven with that ice cream!  I did not say this was healthy or low in calories....I just said it was quick, easy and yummy! LOL!  Enjoy!
Posted by Sam I Am...... at 3:43 PM 11 comments: