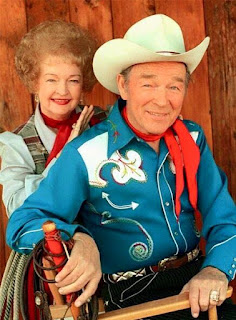 Do you remember these 2?  Dale Evans and Roy Rogers?  I used to watch them every Saturday morning along with Hop Along Cassidy, Gene Autry and The Lone Ranger.  They're both gone now and probably all the above names also.  Yesterday would have been their 69th wedding anniversary.
I was watching some biography sketches about them on You Tube yesterday.  You can find out more there.  Here's a few pictures I nabbed.......... 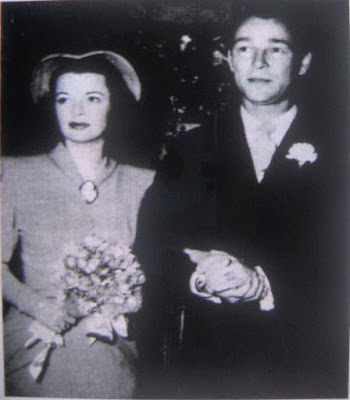 What a sweet couple they were and big hearted too. 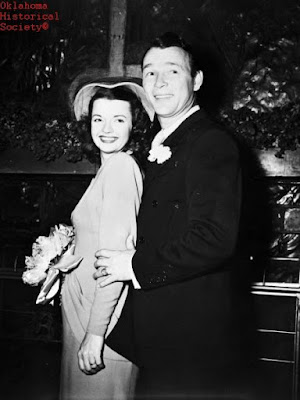 I always though Roy was the handsomest man I'd ever seen and Dale was so pretty and a real cowgirl!  I never knew he had a receding hairline as he always had his cowboy hat on.  I wonder if the hat caused that?  They were married in 1947 at the Flying L Ranch in Davis, Oklahoma.
I was born in 1949 so I missed the wedding. 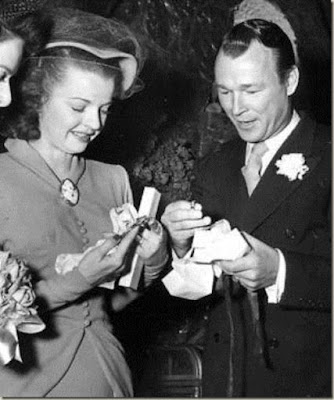 I don't know much about their lives before they got married but it seems like Dale might have had 2 children already?  I'm not sure and then they adopted a bunch and had foster children so it's hard to tell.  They both loved children. 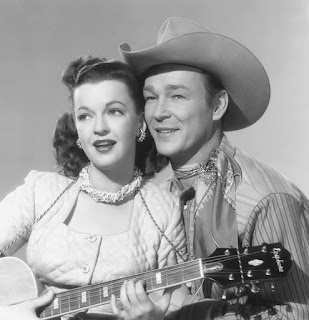 And of course who could forget Trigger?  What a horse!  I still can't get over that he had him stuffed.....not sure how I feel about that but he was an awesome horse there was no doubt about it! 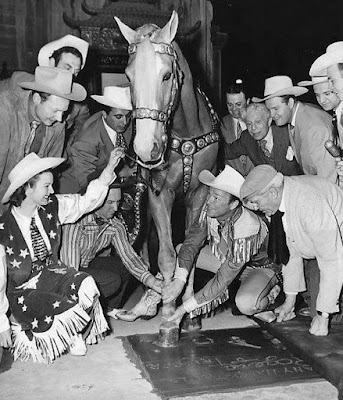 This must have been in the days of "big hair" and look at the sideburns on Roy! 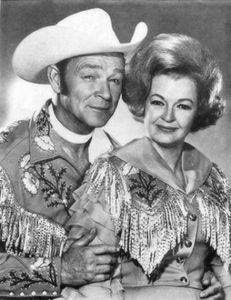 I sure loved them and their show and what great role models they were.  I remember a book I read more than 40 years ago called Littlest Angel or something like that.  It was written by Dale and told about a child they  had that died.  I don't know if it was theirs or adopted.  I'd love to find the book again and read it.  I think I'll search for it online and see if I can find it.
***I found the book      Angel Unaware 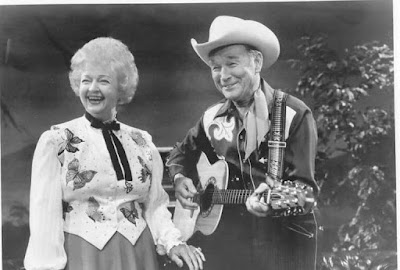 They went to church every Sunday with their entire family and Roy and Dale (and even Trigger sometimes) would visit children in hospitals.
I think I'll see if there is a biography written about them.  I'd love to read about each of their lives even before they met.  They were some of the best that ever came out of Hollywood along with their other cast members and who can forget The Sons of the Pioneers and their songs?  Our generation was very fortunate to have these types of people and shows on t.v.  They were wonderful role models.
Happy Trails!

P.S.  Here's a short biography of Dale
and Roy
I guess they were both married a few times before they met....who knew?
P.S.P.S.  Dale wrote the song Happy Trails and also a song I sang in Sunday School....Yes, Jesus Loves Me, The Bible Tells Me So

I didn't share with you the exciting Christmas morning I had.  I was making monkey bread in muffin tins for breakfast and I was cooking the caramel topping in a saucepan on the stove top when I was distracted by what I do not know (it might have been Miss Peeps in the other room)....at this point I don't remember.  I then smelled something burning and ran into the kitchen to see my sauce pan on fire!  And I mean ON FIRE....flames were leaping up from it.  I grabbed my oven mitts, grabbed the pan and put it in the oven and closed the door but it was still flaming so next I grabbed a container of Bisquick, opened the door and threw it on top of it as best I could.  It still burned!  Then I went for my full flour container and kept throwing that in the oven until the fire was out.  Whew!  I was shaking like a leaf and there was terrible smoke everywhere that was making my eyes burn and my throat burn...it was bad!
I just got through seeing something on television that stated most home fires start in the kitchen and they said you should never leave the kitchen while you have something cooking!  Well, I'll tell you I learned a lesson!  I'm not even going to answer the phone!  I must admit though...the only 2 times this has ever happened to me is when I was cooking with sugar on the stove top.  The other time was years ago making some hummingbird syrup and I got called away from the kitchen.  I opened all the windows and turned on the kitchen fan but I can still smell it in the kitchen and that was Christmas Day!  I do leave things cooking in the oven and soup on the stove top but never again will I leave anything that has sugar cooking on the stovetop! NEVER EVER!  I have a fire extinguisher right there too but have never used it and not even sure if it works.  Do they have expiration dates?  I think fire departments should give classes on the use of fire extinguishers and also how and where to install smoke alarms.  That would be a wonderful community service, not that they don't do enough already especially the volunteer departments.  When the smoke cleared and I was able to go back in the kitchen to work, I finally did make my monkey bread after cleaning the entire oven and vacuuming up all the flour that didn't quite make it into the oven.  It was 1:30 p.m. by the time I had my Christmas breakfast but I feel very lucky to have been around to eat it in my home!
Here's my once pretty yellow enamelware pan and this is after soaking and scrubbing and a stint in the dishwasher!  I'm going to try that method I used on my Le Creuset enamelware and see if that helps. 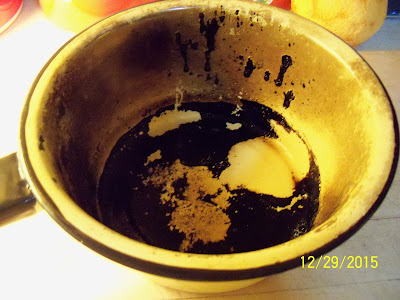 On a brighter note.........I'm crocheting these trees.  They can be used as ornaments or in a garland. The pattern and tutorial is here
I have several to make so I think I'll sew the ends in tonight while I watch t.v.  Once you make one you understand it and it is easy peasy! 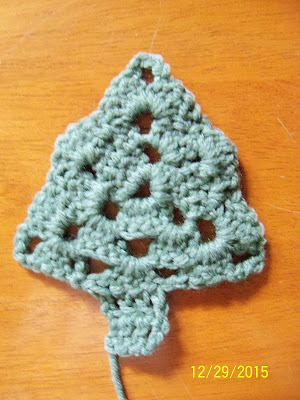 Today has been garbage out to the curb, laundry and I need to pay a bill, make the Buffalo Wing dip and so much more! LOL!
Happy Trails!  And remember what Smoky the Bear says.....only YOU can prevent kitchen fires!  Be careful out there!
Posted by Sam I Am...... at 3:19 PM 14 comments: Links to this post

Today would have been my Mother's 100th birthday but she died back in June of 1999. She was never afraid of death or dying and that's amazing since she saw a lot of suffering in her career as a nurse...maybe that's why...sometimes death is more compassionate.
This is her high school graduation picture.  She is in the middle row, 3rd from the left.  She graduated with her sister who was older but my Mother was very smart so that may be why she skipped a grade or 2.  Her sister, my Aunt Alice, is the first one on the left in the top row.  This was the graduating class of 1933. 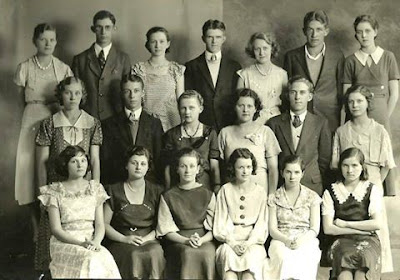 I'm not sure where or when this picture was taken.  I don't have many but this one is a favorite along with one of her on horseback which I couldn't locate. 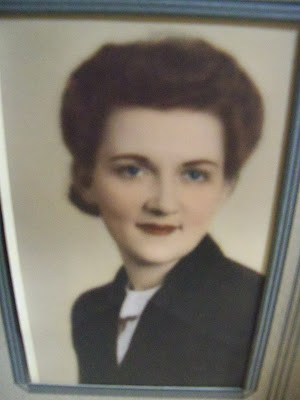 My Mother was the youngest of 6 and was a tomboy just like me.  She would rather be out haying and doing farm chores with her brothers than in the house helping with cooking and household chores.  Although, there were times growing up when I'd wished she'd spent a little more time in the kitchen, if you know what I mean.  LOL!
This picture doesn't even look like her unless it was the army food that fattened her up....she was always slim...this is the heaviest I ever saw her!  She served as a Army nurse in World War 2 but never went overseas that I know of. 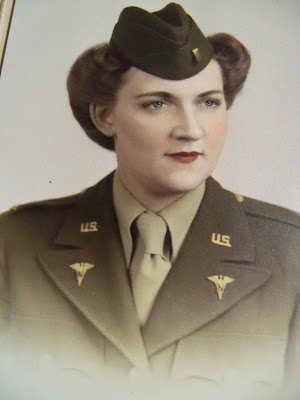 This is her in her nurses uniform.  She put her self through nursing school and later went on to get her masters in nursing.  She worked at Cook County Hospital in Chicago and at Children's Memorial Hospital in the burn unit.  I remember her telling me that was the hardest job she ever had as it was horrible to take care of burn victims, especially children.  She was vigilant about fire safety all her life.  She went on to become an operating room nurse and was so good that surgeons would request her to be their assistant during their surgeries.  She assisted in eye surgeries too which were extremely delicate back then before lasers.  She even traveled to different places in the U.S. to assist in complicated operations.  She originally wanted to be a surgeon herself and I know she would have been a great one. 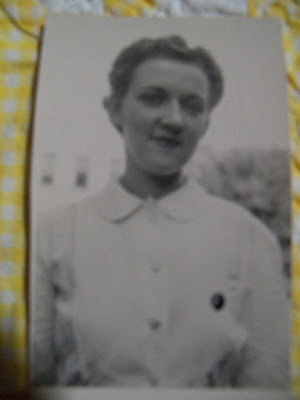 She was a wonderful woman and a great role model.  I never heard her ever say a bad word about anyone and that is not an easy legacy to live up to.   She was strong in character and faith and gutsy and adventurous for her generation.  I will always be proud to call her my Mother and I know wherever she is now she is helping someone, somewhere!  Love you, Mom!  Happy Birthday!

In between the rain drops!

It is wet and wild in the South this weekend!  Tornadoes in Texas and blizzards in Oklahoma and so far we've been lucky...just rain.  I did a lot of "catching up" on chores yesterday and made a great white chili from this recipe
It was really good.......... 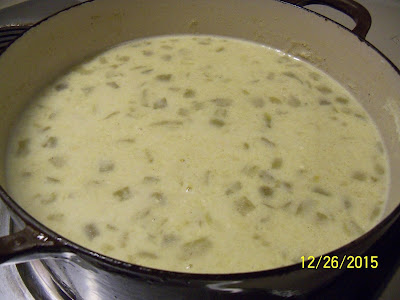 I did have one little mishap and the can of green chilies I bought exploded on me!  I'm sure it was full of botulism and I should have paid more attention but the minute I put the can opener to it....the juice went all over.  I scrubbed everything REALLY good!  So far so good but I had to go to the store and buy another can.  I've never had that happen before in all my years of cooking.  Be careful out there!
Happy Trails!
Posted by Sam I Am...... at 3:30 PM 13 comments: Links to this post