When my children were little I used to make rain plans and sun plans.  For example, if we planned a picnic for outside on a sunny day we would also plan something fun to do if it happened to rain.  It alleviated any disappointment and since I was a systems programmer I was a big proponent of "backups".  LOL!  I've done this all my life and it has served me well.  Now that Spring has arrived (in fits and starts) I am doing the same thing again.  If it's a nice day I am outside landscaping and gardening.  This is ongoing until next Winter as any homeowner will tell you.  But if the weather prevents me from being outside I have plenty of other projects to keep me off the streets and out of trouble!  Such as............cleaning the grout in my bathrooms! Ha! Ha!  Nothing gets done in one day around here....it is ongoing...remember the bedroom painting....it's still there where I left it but I cleaned my bathroom and was getting ready to wash the floor and just couldn't stand the dirty grout anymore.  Look at this and you'll see why..........
BEFORE: 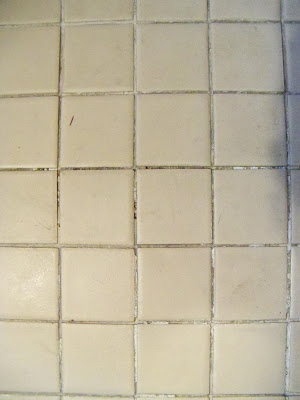 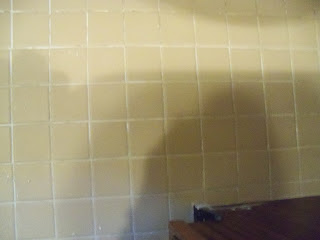 Since I try very hard not to use any chemicals anymore for cleaning (when you know better you do better, hopefully) I looked on Pinterest as I had seen a couple recipes and pinned them to my "cleaning" board.  One was to use Bartender's Keeper, a cleanser.  I tried it and it worked pretty good with lots of scrubbing and the other recipe was 1/4 cup of bleach to 3/4 cup baking soda.  Again, it worked pretty good with lots of scrubbing.  But there is no way around the fact that it is hard work!  Some people used it on moldy grout around their bathtub wall tiles and evidently it took it off easily and bleach will do that to mold.  But mine was on a floor and just plain old years of ground in dirt.  It is still not done and every day I go in and scrub a bit on my hands and knees and it's a like a paste and you leave it sit on there for about 20 minutes and come back and wipe it up.  I've had to do each area about 3 times before it's really clean looking and of course, some areas are worse than others.  It's hard on the knees so I have a towel I kneel on.

On a more fun note, I got some goodies in the mail!  For me, from me! LOL!
There isn't one project in this book by Nicki Trench that I don't absolutely love!  Her style and projects are right up my alley!  There is something about the style and creativity and color sense of my gal pals across the pond that I just LOVE!  I also have resorted to buying my yarn from Deramores in the U.K. in order to get the same colors.  I must admit their prices are great, free shipping over $50.00 (which usually isn't hard for me! Ha! Ha! ) and same day dispatch.  I have received packages from them faster than I have companies here in the States!   So, yes, Nicki Trench is a U.K. crocheter, teacher and designer and has other books out also.  I think I'm going to crochet the whole book!  In fact I was wondering if anyone else loves her work and would want to join a crochet group to do just that?  We could either do it from my blog or on Ravelry.  Let me know if you're interested. 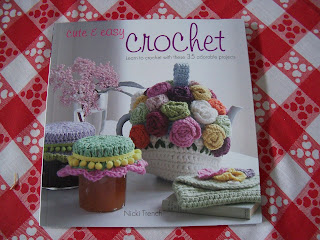 I also got this sweet vintage looking kit of personal products related to the sewing mistress of the home.  I heard about it from Alicia Paulson
on her blog when she carried it in her retail shop.  Imagine my surprise when I found it on Amazon!  I thought it was so precious.  This is the front....... 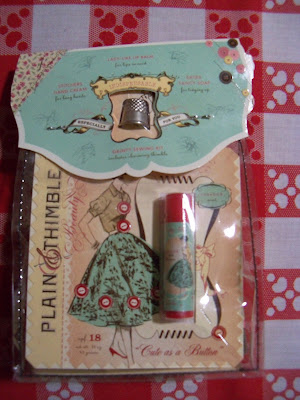 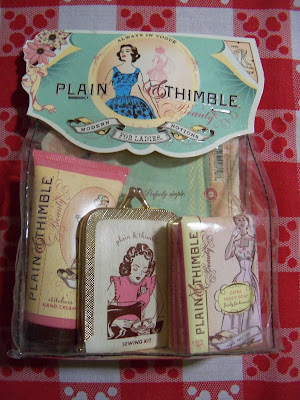 It's so cute I may just use it as a decoration in my sewing room or not.
I hope you had a wonderful day today and thank you so much for your comments  they mean so much to me. TTYS!
Posted by Sam I Am...... at 5:40 PM 1 comment: Links to this post

Happy Mother's Day to Me!

I got a surprise visit from one of my sons and he was here for a week to help me get the house ready to sell!  What a Godsend he was...literally!  I've missed all of you and I'm sorry I didn't blog but as you can see.....we were pretty busy and focused!  Plus, I hadn't seen my son for several years so I wanted to spend every minute with him that I could.
Below is my landscaping project gone awry!  I started this project using landscaping fabric and 6" of mulch but that didn't stop the Bermuda Grass....one of the Top Ten most noxious weeds,
but down here they call it "grass".  I had started back using cardboard and newspaper but had only gotten a little ways when my son showed up.  After a week of he and I working on it (he doing the heavy lifting and toting) ......... 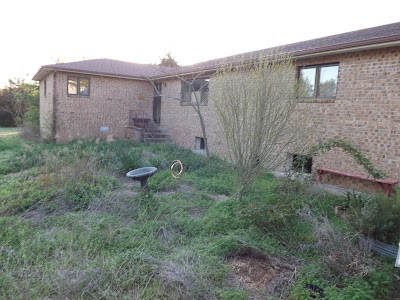 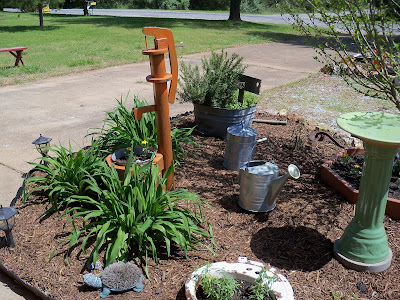 This is where I had gotten to before he came down.......plus I hadn't mowed yet this Spring. 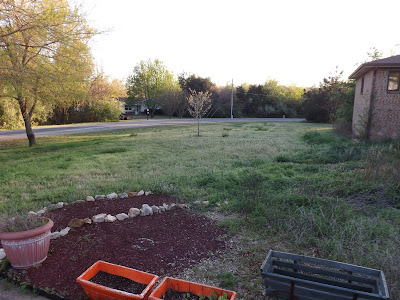 My lawn mower started but wouldn't move.....he fixed it!  So, I mowed and he trimmed trees and brush. 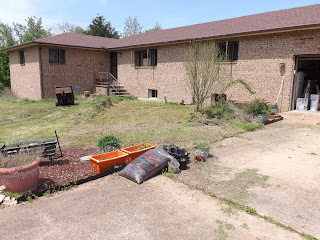 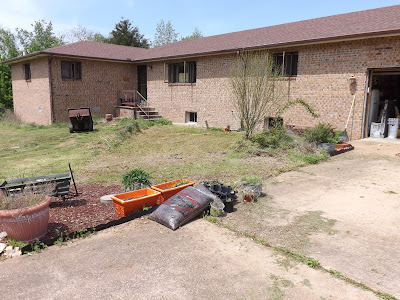 Then we removed all the rocks I had laid and started over, laying cardboard and news paper I had been saving. 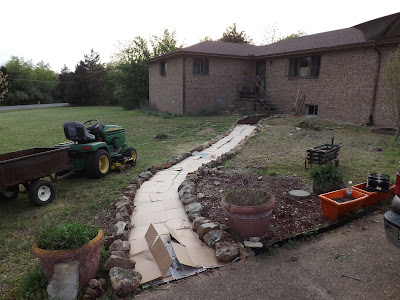 We had also taken the lawn trailer and gone off and collected bigger rocks in the woods....yes, they grow out there in the woods.  Sometimes I see people throwing rock seeds out there too and fertilizer so they grow bigger.  My son did all the rock collecting while I kept the trailer moving.  LOL!
Here's our assistants who guarded us while we worked... 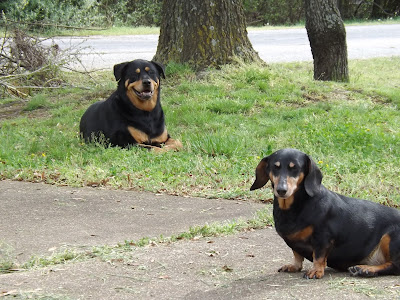 Then it was off to Wally World for mulch, flowers and not much else as you can see the Tahoe was pretty full! LOL! 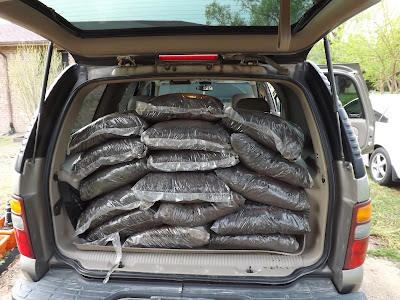 There I am in all my glory with a beautiful path FINISHED FINALLY.....thanks to my son!  I've only been trying to finish this project for a few years now!  That's the only thing I don't like about getting older is I don't have the energy or the strength I used to have and that makes me mad, dang it!  Benjamin was always my "gardening" sidekick when he was little and we always worked well together and still do.  It was a true joy to have him here. 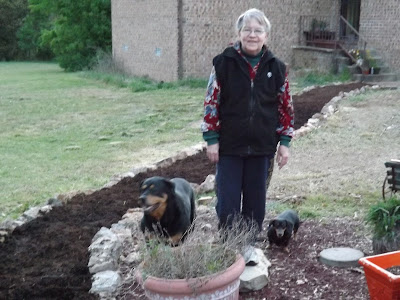 Then we started landscaping from the corner where I had started........ 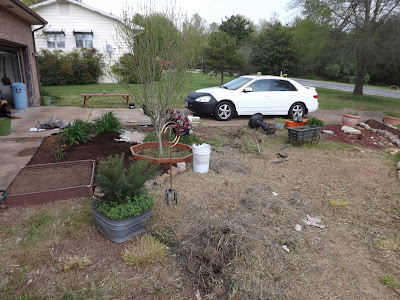 We moved the octagonal raised bed to around the tree......and he reinstalled the edging better than I was able to do with a rubber mallet!  We put in another raised bed I had for my veggies. 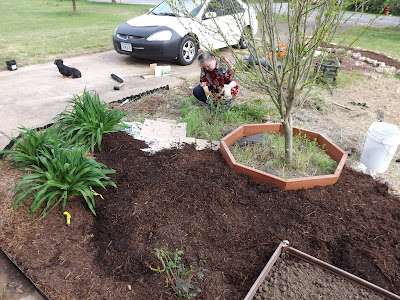 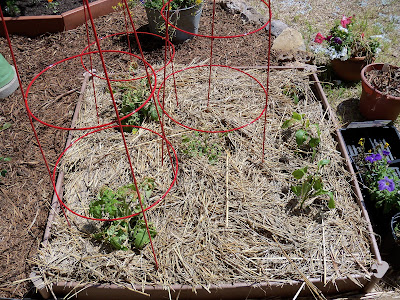 Snce we had to fill in the raised bed with dirt but didn't want the dirt on the bark of the tree my son took a plastic pot and cut a slit in the side and cut out the bottom and slid it around the trunk to keep the dirt away from it.  Brilliant!!!  I planted marigolds around the tree and placed a little leprechaun there to protect them!
And what's a tree without a birdhouse? 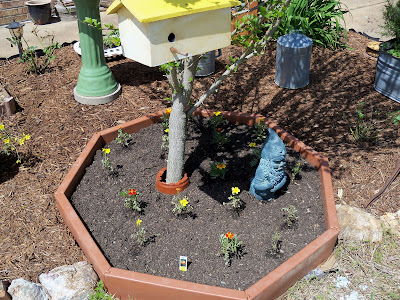 I had 2 old sinks I had gotten for free.  The one here I planted with snapdragons. 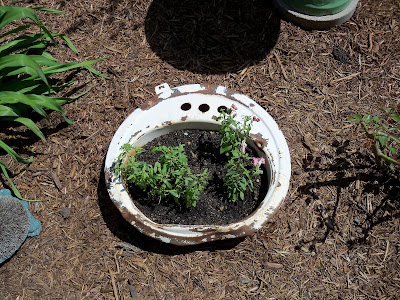 I have old tools and paraphernalia from the farm I used to have.......and I utilize it whenever I can.  There are my Rosemary and Oregano in the old washtub and an old pick axe, a hand pump and some watering cans. 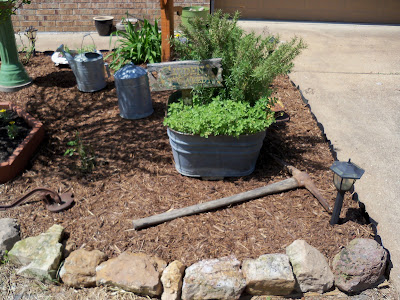 Over the course of the week we did this little bed also with my solar fountain and some "odds and ends".  Unfortunately we had a frost and it took it's toll on my plants so I'll have to see what needs replacing.  Who knew at this time of year!?!?!  The orange pot had a nice healthy zuchini that was going to trail over the pot and leave nice squash throughout the mulch.  The old sink had Gerbera daisies I had overwintered from last year and some geraniums too. 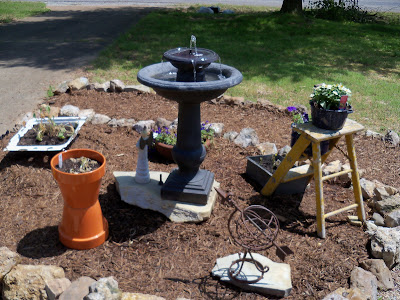 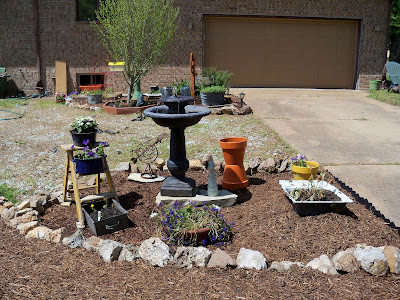 Not only did we do all this but my son cleaned and fixed all my gutters, trimmed my trees, flipped my mattresses for me and cleaned up my garage so I could get the  mower and the SUV in there at the same time.  He took me out to dinner several times and wouldn't let me pay for anything and we laughed and had such a great time together.  It was THE best Mother's Day present I could have ever asked for and it was all a total surprise!
I have missed you all so much and it's like I've been on vacation but it's always nice to come home too!  Bless you all and I'll be stopping by to see what you've all been up to while I was "away"!  TTYL!
P.S.  Here's a picture of my son, Benjamin.  This was taken up North last Fall I think.  A lot of the men grow beards in the Winter to stay warm and then shave them in the Spring.  I didn't get a picture of him while he was here as he was taking all the pictures!  Duh!  I should have taken pictures of him but I think I was in shock most of the week and thought I would wake  up and it would all have been a dream! LOL! 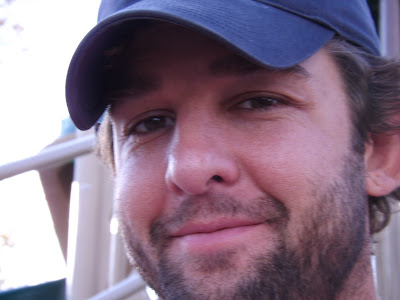