I was really looking forward to this book as I was under the impression it was about "women" farmers but although interesting,  it was all farmers out West (I should have known as the forward was by Mary Jane' s Farm founder and she lives out West).  It was good but most of these women were married so they had a partner and I was really looking to read about women doing it on their own not to take away from the fact that I'm sure they work hard!  There were a couple single gals but I really felt like with the high percentage of women farming these days that it wouldn't have been that hard to find "women" farmers doing it on their own without a man in the background.  I know there have been several in MJ's magazine.  But it was interesting never the less just not what I expected.
The book below was a joke!  I can't remember where I heard about it but it sounded great...a life reinvented as that's what mine is since I retired and it was about a woman who retired from being a librarian for years. 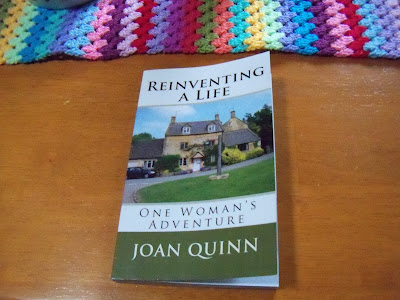 First of all I thought it was non-fiction but it was fiction but there was no plot, no story just this woman talking about her day-to-day life of travel and arrogance and throwing names around in foreign languages.  She even thought we would be interested what she had to eat at each meal.  It was by far the strangest book I have ever read but I kept thinking it would "kick in" any minute and then it was over and I was sitting in shock that any publisher would touch it with a 10 foot pole!  I thought, it must have been self-published and sure enough......it was!  How did I get a hold of it?  I bought it but I do remember reading something about it or seeing it and again having a totally different impression and certainly didn't expect a self-published book and fiction which means there should be a basic story line of some sort?  I will be sure from now on to see recommendations from some major reviewers before I plunk my money down from now on!  No fool like an old fool! LOL!
I hope you had a great week and a wonderful weekend ahead!  It's pre-season but it's football and I'm grateful especially having withdrawals from the Olympics....I'm a sports gal can you tell?

It must be my magnetic personality!

Well, it has been quite a week!  It started on Sunday when I couldn't load pictures because I ran out of storage for my blog.  I now pay $2.50 a month to blog so that's fixed.  Then we had a storm....1/4 inch of rain but the lightening hit my t.v. and now that's broke but no fires so that's good.  Then I had problems with my Dish satellite so I spent a day on the phone with them (ok, so not all day...but it felt like it!) then the next day they came out and installed a new Dish Satellite which took the afternoon.  By then, I needed to go to Walmart and get groceries and I've been behind ever since!  The storm woke me up the one night and so I was tired anyway....it was just one of those weeks or 3 days where I could not get anything done.  But hopefully, I'm back on track now and can blog and watch t.v. and get some needlework done too.  I haven't even touched it! BTW....yesterday they said it was cooler so I went outside and started doing some heavy duty landscaping and I thought I was going to have heat stroke!  I came in and it was 97!  They call that "cooler"?  Whoa Nellie!
Below is my ugly landscaping!   I tried landscape fabric and that did NOT work so I am using newspaper which is more natural and hopefully by the time it "rots" I will have established a "no weed" zone.....most notable Bermuda Grass...one of the Top Ten most noxious weeds known to gardeners!  I would have never started this project had I known that....live and learn!

Below is what I am dealing with......at least some of it died out with the drought. 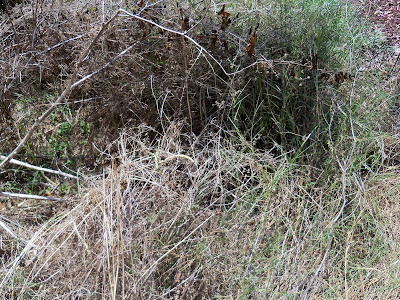 But I did manage to take 3 boxes of things to the Thrift Store and I picked up a few things too but not 3 boxes worth.  Mostly, it was my Fall wardrobe! LOL!
This heavy duty basket.............I can always use good baskets! 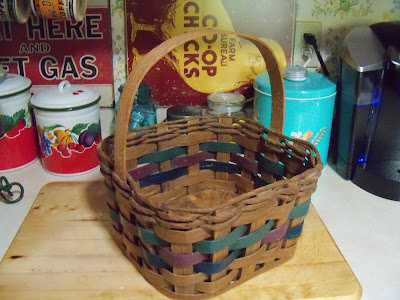 This wallpaper is vinyl and pre-pasted and only .99 a roll....I bought all they had as even if I don't use it as wallpaper it is great for lining drawers or even on table tops as it is vinyl and washable.  It looks like green ticking cloth. 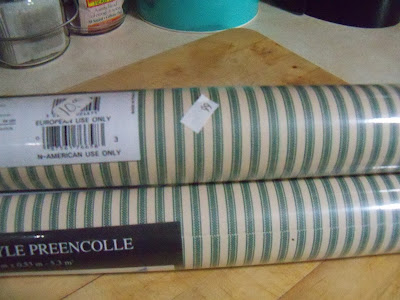 I also got this cute little bowl/dish but after I got it home I could read the bottom and it had come with a candle in it at one time so I probably won't use it for baking or eating but it is cute for holding a candle. 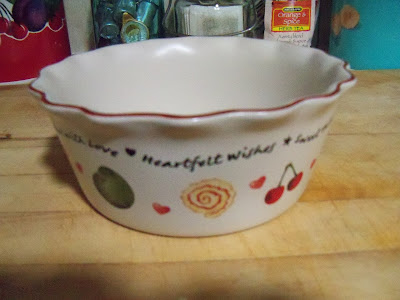 That's all for now but I have lots to catch up on in telling you and also visiting and seeing what you all have been up too!  Have a great Thursday!
Posted by Sam I Am...... at 4:00 PM 4 comments: Links to this post 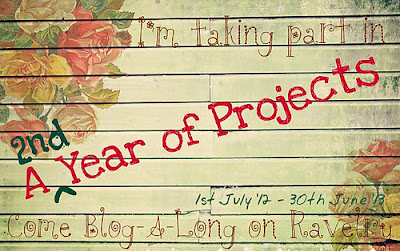 Well, the Olympics are ending tonight and maybe I'll get more done.  I thought I could get a lot of needlework done but I forgot I used up all my multi-tasking abilities when I was younger and now it seems I can only focus on one thing at a time else I mess up! LOL!
I do have an FO..........finally!  My crocheted table runner!
Well...I just got a message from Google that I have used my 1 GB of storage and I have to pay for more.  I went into Picasa and "deleted" a bunch or so I thought
but if I delete too much then there is no blog archive right?  Hmmmm.   I worked on deleting a bunch and kept logging off and back in but it still says I have no storage.  Does anyone know anything about this?  Have you other bloggers paid for storage or how did you manage this "turn of events"?  Until I figure this out I guess there won't be any pictures....sorry.  I hope you're having a better Sunday than I! LOL!
P.S.  I have Google blogspot blogger.
Posted by Sam I Am...... at 2:51 PM 8 comments: Links to this post