I got out and mowed yesterday before the rains coming this weekend and yesterday was nice and cloudy but today....Whew!  It's 90 or near there and the humidity is up again.  So glad I mowed yesterday!
I used my furniture polish again too.....look at this one......... 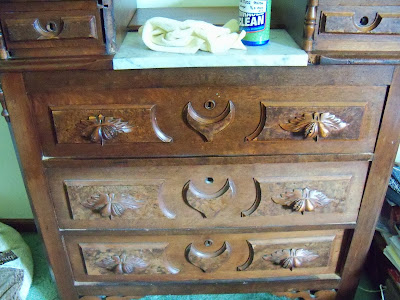 I was so thrilled by the look of it I didn't take a total after picture but as you can see it really made a difference.
I've been cooking up some "grub".....yesterday was lentil and ham soup.  I had leftover ham but no bone so I went to the store and they had "smoked pork hocks" so I froze a few and used one to put in the soup.  Evidently they use these a lot in the South.  It was yummy and very filling and healthy too.  I made cornbread to go with it.  This was when it just started cooking.  Here's the recipe 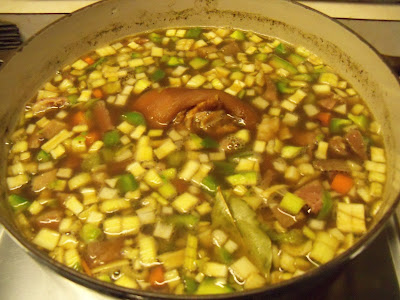 This morning I made scrambled eggs and threw in some banana peppers and chopped up tomatoes from my little garden.  I always take a picture before it's cooked and then forget to take one after....I guess I'm too hungry to bother and want to get right to the eating part! LOL!

Pretty colorful it was and very tasty....again a healthy dish. 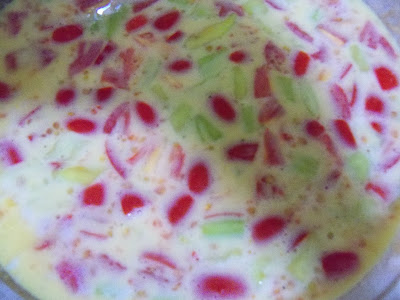 Fall/Winter is coming as the spiders are making webs like crazy around the outside of the house and trying to get inside too!  This one was eating a moth for breakfast.  YUCH!  It looks like the black widows that love to hang out by my front door but I didn't want to get close enough to identify it. 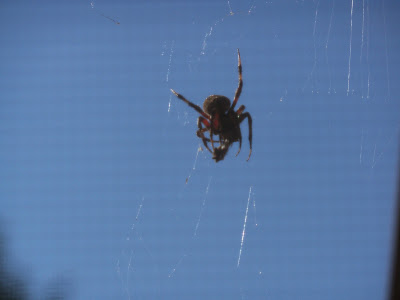 I had my knitting book out and I thought maybe Miss Peeps was trying to read but right after I took this picture she attacked it and ripped it!  I think she's teething....she'll gnaw on whatever is available!  But not my books....shame on Miss Peeps!  I had put the yarn up but I didn't think I needed to worry about the book.....WRONG! 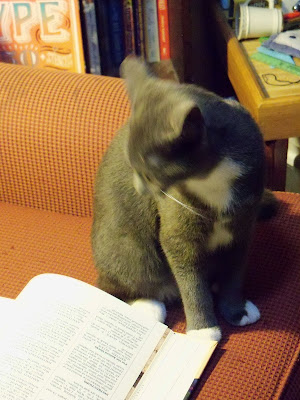 Speaking of knitting, I have 2 squares done of 42 for the "scrapghan" blanket I'm working on.  There are 15 felted wool squares, 15 crocheted squares and 12 knitted squares.  The squares are working out to be about 9" x 9".  Each block is a different pattern which makes it interesting and I'm learning some new designs.  The first was a plain garter stitch....all knit which makes it look like all purl to me. 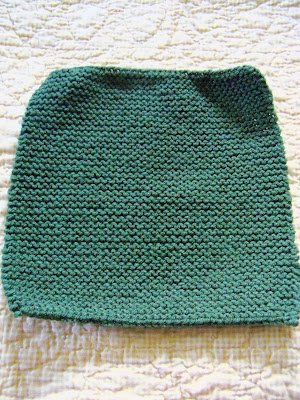 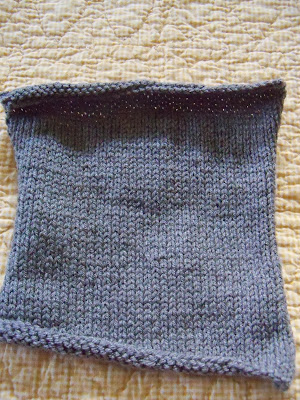 The next one is a diamond stitch which is fun to make but you have to pay attention....no t.v. watching for this block!  Can you see the diamond pattern starting to emerge?  It's hard to see with the navy blue yarn. 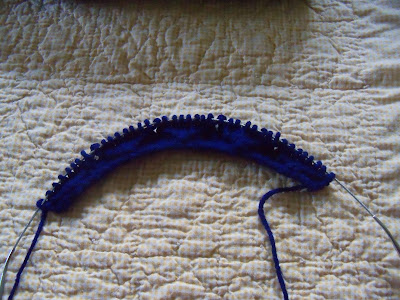 I need to sit down and make my Christmas list....so far it's just in my head and that's pretty scary!
Tonight starts Grey's Anatomy but with Derek gone.....(after all summer I'm still not over it), I can't imagine that the show will be as good as before.  The whole show was based on them as a couple, their careers, their home and children!  Oh, don't get me started!  As for the 13th season of Dancing With the Stars?  Bring it on!  It started Monday and there are some great people on there.  Bindy from Australia who's Dad was the alligator whisperer and who died....she's 18 now!  Where have the years gone?  Paula Deen is on and one of the guys from the threesome that took down the terrorist on the Paris train.  Plus, I forget his name, but he's a crazy old guy with white hair and I mean "crazy"!  Everyone treats him like he's normal but I don't see anything "normal" about him.  The poor gal that has him as a partner is already having to fight him off.  He's disgusting!  Anyway, that's my Fall t.v. roundup along with college football.  The NFL is almost non-existent on regular t.v. since they can get "the big bucks" from the cable networks.  It's okay as the college games are more exciting anyway.   What are you watching this Fall?
Happy Trails!

I have been working hard around here or hardly working....some days it's hard to tell but last week I came upon some really good Pinterest pins that WORKED!  I've tried to stop pinning and start doing so here are the results.........

#1 - I bought 2 Le Creuset pans for about $2.50 each at a church bazaar several years ago.  They were both dark brown inside from something having burned in them.  I thought for $5.00 I could try and get them clean.  Well, I tried everything....SOS pads, steel wool but nothing worked.  They were "clean" but the burn marks were still there..........see?  I still used them because God knows it wasn't coming off...... 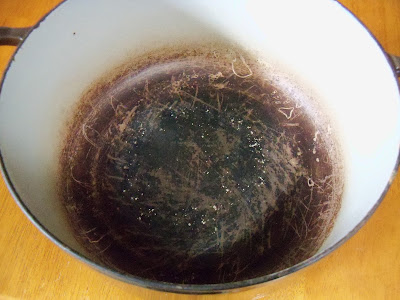 I saw a gal had pinned that she had NEW ceramic coated cast iron and had made strawberry jam in it and it burned on the bottom and she couldn't get it off.  Hers wasn't nearly as bad as mine but she paid "the big bucks" and I was only out $5.00 plus I still used them they just weren't "pretty" like hers.  She said she put about an inch of water and and a scoop of Oxiclean in her pan and brought it to a boil.  She said she let it boil for a bit making sure it didn't boil away. 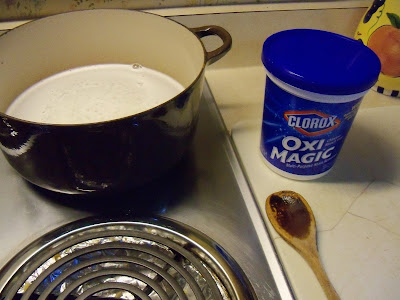 What she didn't mention is that it quickly starts foaming and will go right over the edge if you're not watching it.  It wasn't on the burner very long before this happened and I wanted it to boil longer so I kept scooping the foam out and turned the burner down.  I added more water and more Oxiclean so I probably did 3 "episodes" of the cleaning ritual. 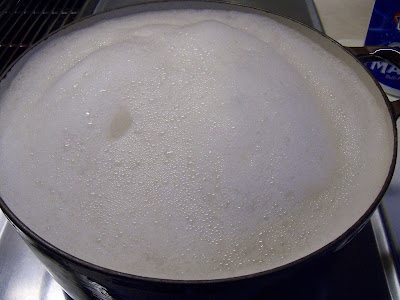 I was getting tired so I quit and thought that was enough and it looked like some stuff had come off as the water was dirty.  I dumped it and put it in the dishwasher but I could tell there were still some spots........ 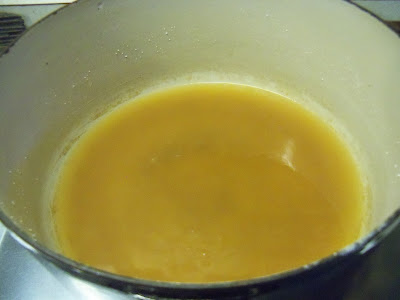 but when I took it out of the dishwasher....lo and behold! 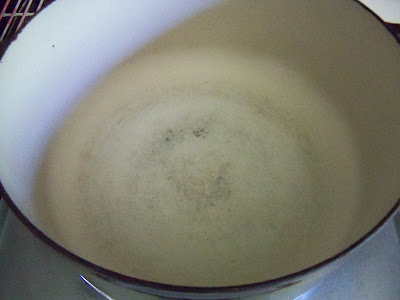 It's not perfect but "it came a long way baby"!  This is for ceramic coated cast iron.  I'm not sure what it would do on anything else and let's face it.........I had nothing to lose!

#2 -  Homemade Glass Cleaner -  I have been making my own for awhile now and here is the recipe I use which works fine for me.  1/4 C of vinegar, 1/4 C of rubbing alcohol, 1 T of cornstarch and 2 C warm water.  You need to shake it up each time you use it but I don't mind.  But then there was a pin I had that talked about a woman who had asked her husband to wash the windows and he went to the automotive store and bought Rain-X which is for car windows to allow the water to sheet off of the windows when you're driving.  Well, he used it on all their windows and she said their windows stayed clean for a long, long time!  Now, I have not tried Rain-X on my car or house windows but I plan on getting one can and trying it.  I know people who use it on their car windows and love it but I have not tried it personally simply because I am guessing it is fairly expensive but I have not priced it at all.  I'm going to try it but I may not be able to afford to do all my windows at once but what a great idea if it works!  Let me know if you try it before I do.

#3 - Homemade Furniture Polish - This was a pin I just tried and I love it!  I wish I would have taken a before but I really didn't think it would be that obvious but it was.....I have one little picture before I got carried away............btw it is 1 C vinegar and 1/2 C olive oil and again you will need to shake it before spraying on your furniture or on a rag each time.  See that dull triangle on the left?  That was where I had not used it yet. 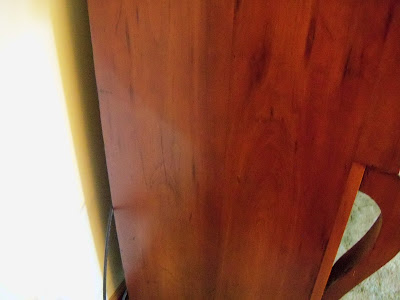 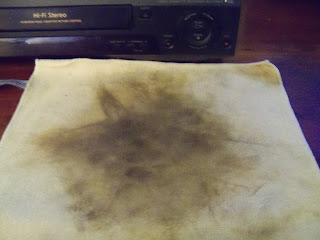 I was amazed at the filth dirt that came off.  The wood really looked so pretty afterwards and it felt clean too.  The pinner did say that you should test it on a spot first although I didn't because none of my furniture is highly varnished and it looked a lot like what she was using it on....old wooden baseboards, doors and trim in her older home.  All my furniture is "old" and none has a highly varnished surface.  I've used sprays in the past and Murphy's Oil Soap and this did a great job and there was no scrubbing. 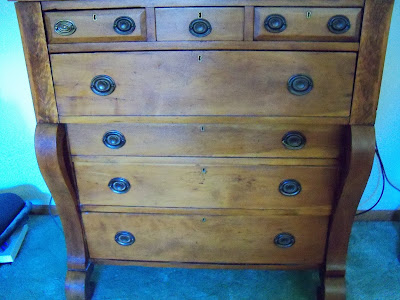 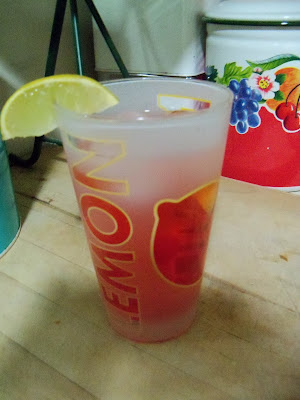 This is a really tasty "hack"...you take 1/4 of a lime and slice into 2 pieces.   In the bottom of a glass you put 2 maraschino cherries and one of the lime slices.  Then you add crushed ice (I just used regular), Sprite and 3 T of the maraschino cherry juice and the other lime slice.  TaDa!  She loved it and so do I!  Unfortunately, you will run out of the cherry juice before you run out of the cherries so I bought some grenadine but not sure if that will be the same.  I'll let you know.  The other pins are on my CLEANING board and the last one is on my LIQUID REFRESHMENT board as there are other people to credit with these pins.  Enjoy!
Happy Trails!