It's the garage!  Getting ready for a garage sale and cleaning at the same time.  I forgot to take a before picture of this area but trust me..... it was full of leaves and dirt and there were items on the steps....a real mess!  The stairs need to be washed and painted but that's for another day!  White carpeting and now white stairs?  What were they nuts? 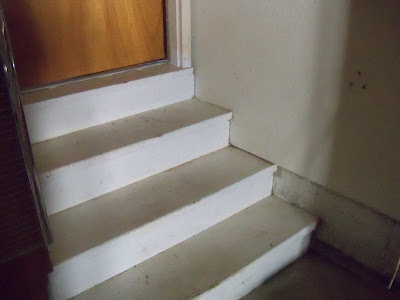 This is a shelving unit that my dad made to hold all that stuff...some of it is mine but much of it was already on there.  My dad was a contractor and trust me.....he had so much 'stuff'...building supplies and hardware....some of it I don't even know what it is! LOL!  I did go through a lot of the hardware items and cleaned them and put them in jars several years ago.  He had them in cardboard boxes that were falling apart and the mud wasps had built nests in....don't worry...the wasps were gone when I went through them but it was truly a filthy job!  Again, I forgot to take a before picture as I had cleaned off the very top shelf and the bottom on the floor there............but I have my work cut out for me!  Again, I would love to paint this unit but not now............. 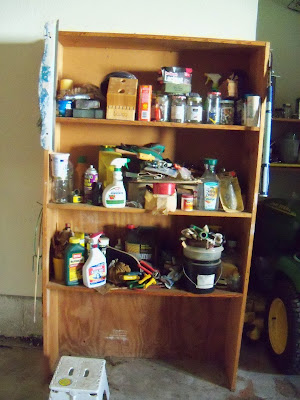 Here are some of the containers full of nails, screws, etc. that will be going in the sale and there's more where they came from! 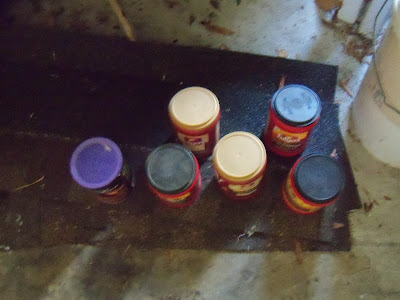 I also have an old clothes basket that I have been putting stuff in after I clean it to keep temporarily until I get a portion of the garage cleaned so I can set  up some tables. 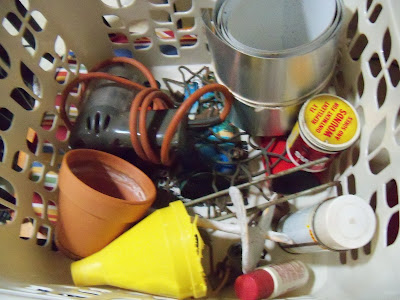 I even found some of my old horse supplies!  Oh, how I miss my horses.....
Here's another shelf that I need to clean and I can already tell that most of that stuff is going in the garbage or the sale whichever is appropriate. 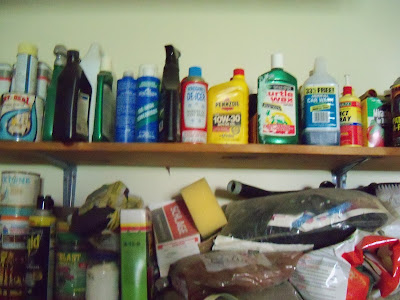 I know this isn't a 'pretty' post and I didn't feel like I got a lot done today as I had some errands to run this morning but it's a start and it's better than it was before!
I hope you made some progress today in whatever area you wanted to!
Happy Trails!!!